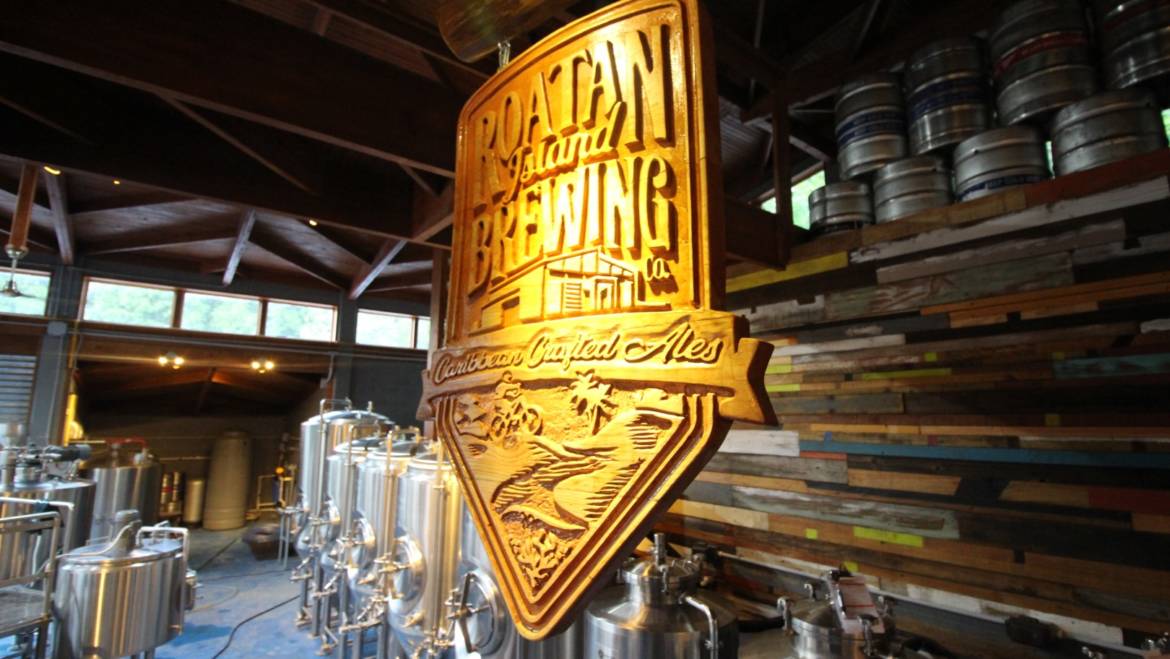 The island Roatan is about diving. We have the world’s most pristine tropical coral reef literally at our doorstep. For many scuba diving three and four times a day is not unheard of, but as your dive computer will annoyingly tell you, there must be time spent on the surface, and although we do not allow drinking adult beverages between dives, with the day over, on the surface there is beer.

Local craft beer is being brewed on Roatan! The days of only four bottled local beers mass produced on the mainland as a choice for indigenous consumption are over!

Much to the joy of local beer aficionados, nestled in a natural jungle setting just off the north shore of the island, Roatan Island Brewing Company has come into existence. Born from the inspiration of Ilias Maier, local hotel and resort manager, entrepreneur and man about town, who upon purchasing the property on this salty tropical isle became aware that it just happened to be sitting on the island’s largest fresh water aquifer. Although the ocean gives us life, weather, and so much more, fresh water gives us beer! 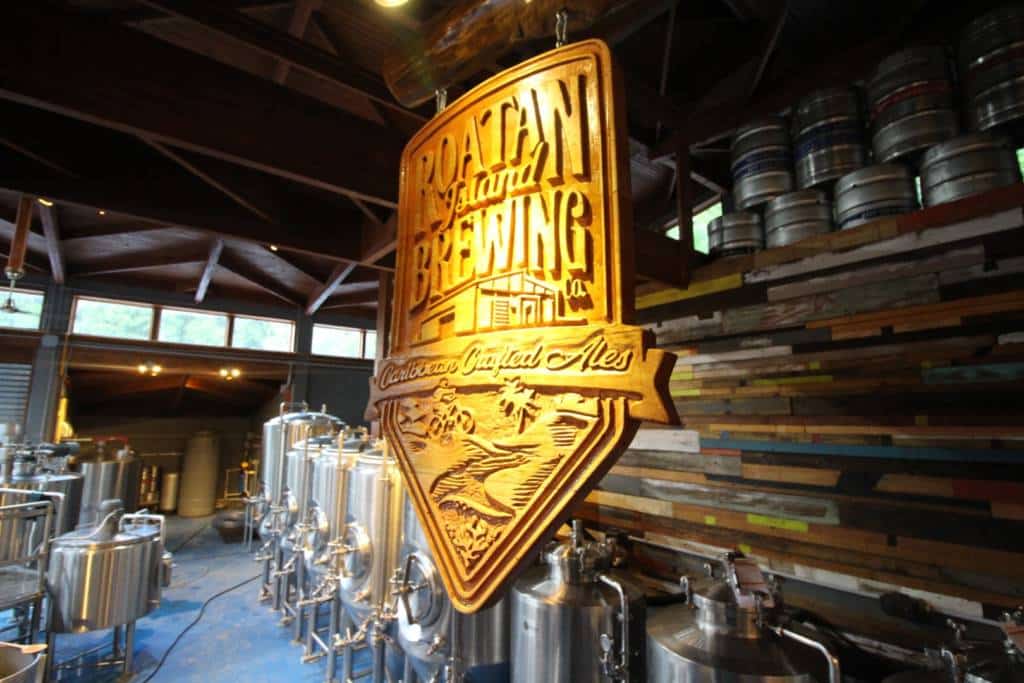 With chilled effervescing beverages in mind, design and Construction of Roatan’s only brew house began in 2015. Wells were drilled supplying copious amounts of pristine tropical rains which had slowly filtered through limestone layers over the ages, and the natural setting was enhanced with the planting of local fruits and plants.

As the brew house neared completion in 2017, Mark Flanagan, local entrepreneur and Former Program Director at the SOL Foundation, came on board as company partner adding his inspiration, dedication, and lower back to the cause; beer.

Soon the long awaited arrival of the brew equipment ended with a 40-foot truck appearing on site containing a full load of beautiful stainless steel fermenters, mashers, boilers, heat exchangers, and assorted brewery bric-a-brac. Quickly arranged in the brew house, and with the construction of bar and restaurant portion being well on its way, it seemed that beer was near!

To live and do business on Roatan has its challenges. Roatan is a forty-mile-long beautiful tropical island in the Caribbean Sea just north of Honduras, and it has everything one could ask for in a vacation or retirement home. However, when trying to build the only brewery offshore of everywhere, the lack of industrial infrastructure can be maddening! Specialized fittings and parts only available in the states take 3 weeks by the local freighter, frustrating attempts to schedule a soft opening.

The rumor was out, Roatan is a small gossipy island with a generous share of beer drinkers anticipating liberation from the local long-neck bottles with island made draft craft beer. People began showing up randomly, usually saying they were out for a ride and “heard there was a brewery around here somewhere” and the jungle telegraph got louder.

With Ilias and Mark unable to show themselves in the community without being bombarded with “where’s the beer?” type questions, the installation pace increased. Control wires were pulled, water supplies piped, pumps powered up, the walk-in keg storage and glycol system de-bugged, and finally the day arrived when the gas for heating and boiling the water and wort was completed, followed the very next day by the brewing of Roatan Island Brewing Company’s first batch of beer. 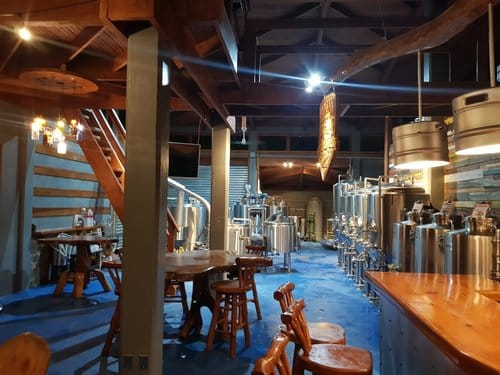 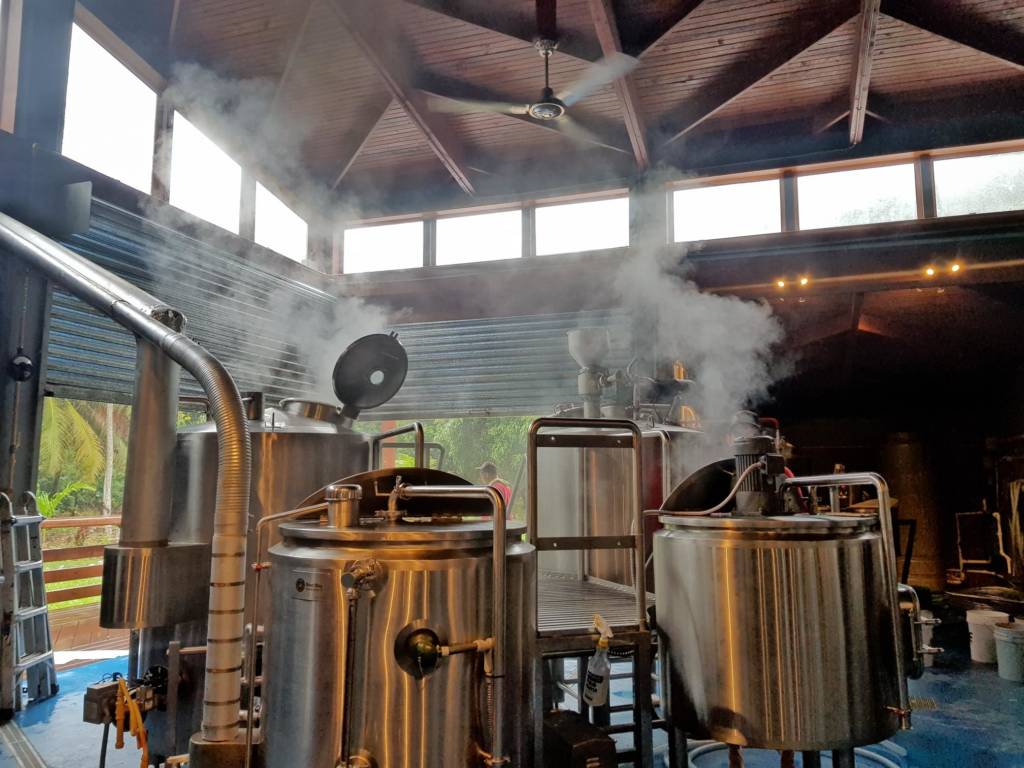 A batch of beer takes a while to make. There is the initial day of bustling activity with grinding of the malted grain heating water, mashing in (soaking the crushed malted grain), sparging, filtering the liquid from the grain resulting in wort, which is boiled and infused with hops, cooled and transferred to a temperature controlled fermenter where yeast is added, and the fermentation starts. The yeasty beasties can take up to a week to transform the sugars obtained from the malted grains to alcohol, the fun stuff, and carbon dioxide adding carbonation. Meanwhile, back at the brewery while a few different brews had been run and were in the fermenters, the process of getting the kinks worked out of the keg filling was under way, ready for the next phase, getting beer to the masses.

About this time Ilias was contacted by HGTV who having heard the rumors of an up and coming brewery, were interested in doing a segment on one of their episodes of “Caribbean Life”. Their concept being a quick video clip around the brew house, and a bit of beer being poured out of the tap, and sampled by stunning models while conveying expressions of orgasmic delight, to be shown during an upcoming feature about the Bay Islands of Honduras. This is great! Amazing! Getting unsolicited exposure on international broadcasts for a startup business just getting around to starting up? Bring it on! Who could say no?

At this point there was one little problem. Six different kinds of beer, which had been constantly sampled and critiqued through a convenient little valve in the side of the fermenters, were in process or kegged and chilled in the refer-room, , but that little bit of technology that gets the beer from the keg to the glass had yet to be sussed out! 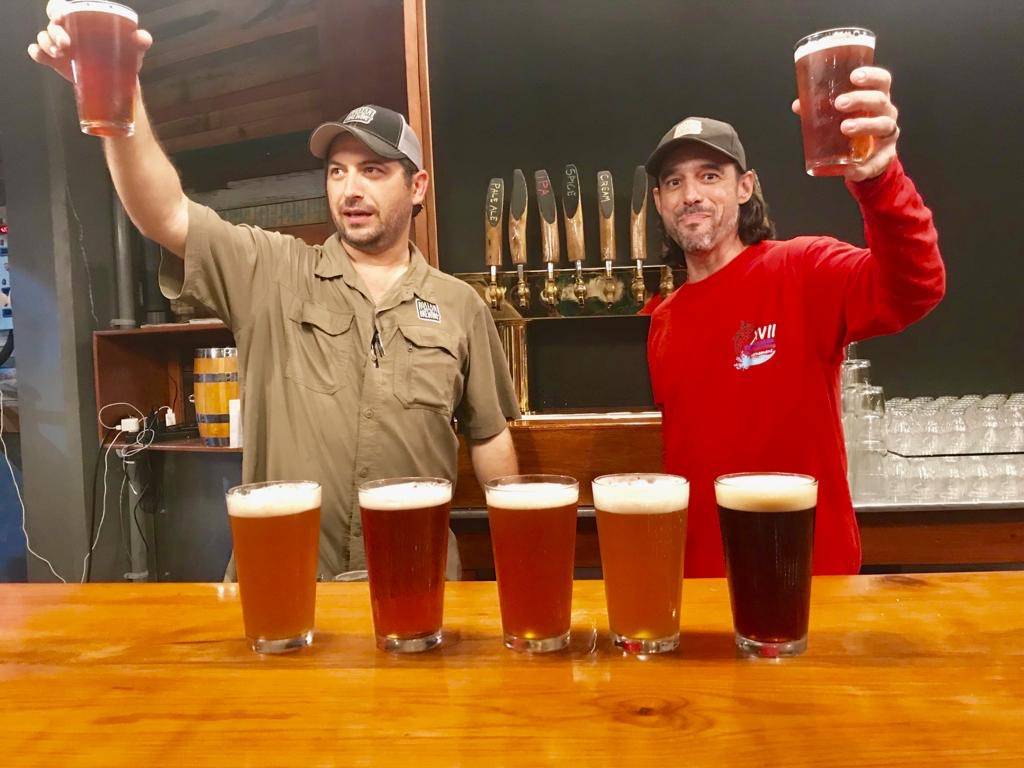 With the support of friends coming from the states willing to smuggle unobtainable parts for the good of the cause (beer), the carbon dioxide pressure system was finalized, the refrigerated row of taps for the bar were re-sealed, polished, and installed with the first glass of Roatan’s first craft beer poured from its tap just as the cameras showed up to chronicle the event. Shortly the good folks at HGTV were in contact to say that upon careful consideration they would like to come back for more filming, and use Roatan Island Brewing Company as the feature for one of their episodes! It has been rumored that the program will air in March of this year, and will no doubt be somewhat mentioned on the Brewery’s Facebook page.

No longer able to deny the masses, a soft opening was scheduled for a Sunday afternoon. Eight types of beer were offered along with printed requests to rate the brews. BBQ grills were set up offering burgers and brats, and at one o’clock all ideas of a “soft” opening went out the proverbial window. The quiet of the jungle and the murmur of a couple of brew masters softly slurring to themselves as they boiled, mixed and regularly sampled (quality control mind you) their work, was replaced by shoulder to shoulder beer enthusiasts. Strangely the volume levels of marveling, sampling and critiquing rose to a minor din as the stimulating properties of the newly offered products took on their predictable effects. The brew house was filled to capacity, and a great time was had by all, with darkness seeming to fall all too quickly. 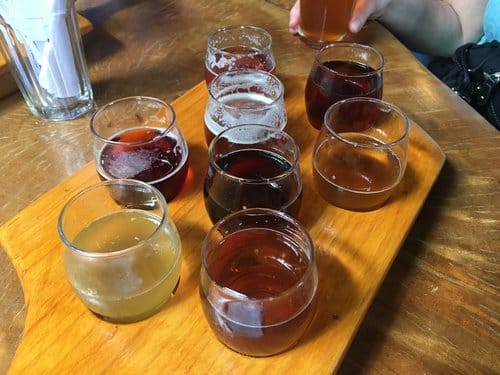 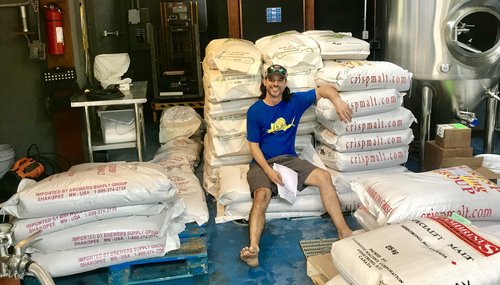 Two subsequent “Sunday Fun-day” half day openings were held to much appreciation, with many ex-pats reminiscing about keg parties in days of old, drinking beer and grilling food, in the forest away from town, with good friends, and drinking beer.  However just as regular hours of operation were contemplated, a little government problem in the United States threw a wrench in the works. Honduras produces and exports many agricultural food products, but it is not really covered in amber waves of grain, so the barley malt needed to produce beer is shipped in from the United States. For political reasons beyond anybody’s control, those who inspect, certify, and allow grain exports to Central America were unable to do inspections, certifications and allowances. With obligations to supply the establishments already serving the brewery’s draft beer, resources (the un-shipped barley) had to be prioritized to these commitments, and “Sunday Fun-day” activities had to be postponed.

Finally, a certain country got their act together, the long awaited grain shipment appeared on the island, and frenzied brewing commenced. Two weeks, and a bunch of beer later, Sunday Fun-Day was back on!

Upon the announcement, the gang at West End Divers pointing out that they, with much self-sacrifice, had been missing out on large gatherings of people drinking beer, and started making arrangements to attend. Without too much surprise they managed to convince the guests to get in a couple of dives on Sunday, and then head to the brewery for the rest of the afternoon. A thirty-passenger bus was hired and filled to capacity, and after an adventurous ride arrived to the brewery the gang joined the throng at the re-opening. Unbridled sampling ensued, favorites chosen, and larger samples obtained to be consumed while playing outdoor games like “Corn-hole” a horseshoe sorta game with bean bags tossed at a hole in a board, with beer, and Foos-ball (we get to play it outside in February here, just sayin’) with beer, and munching on roasted chicken, with beer. Once again night falls too fast, and the bus had to depart, with slurred plans of shortly returning. Roatan Island Brewing Company is planning to be open for “Sunday Fun-day” through the month of March when it is anticipated to expand its hours of operation. Until then you can sample their signature beers at “Herby’s Sports Bar” in French Harbor, “Sundowners Beach Bar” in West End, and “Taps Pool and Sports Bar” at Paradise Beach Resort in West Bay.